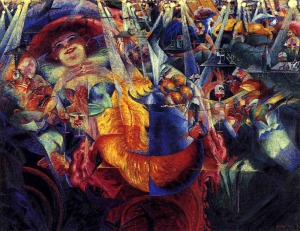 Analysis of Boccioni’s Painting, The Laugh

Boccioni took from Bergson’s “theory of laughter” in his construction of The Laugh.[1] Bergson believed there was healing and relaxation found in laughter that could relieve tension and break apart a person’s stiff mentality towards life. The Cubist and Futurist movements both sought to restructure the foundations of society, getting people to rethink the bourgeois culture that had restricted humanity.  In response to these movements, Boccioni painted The Laugh along with other works, to create a scene that is broken apart and distinctly abstracted by a loss of structural borders. Through this painting, Boccioni demands the audience to dissect the images seen in everyday life, and to notice each piece and its contribution to the whole.

He begins by drawing the attention of the viewer to the woman in the upper left hand corner. She is gaudy, vibrant and full of animation. Her skin is decorated with colorfully bright makeup, and her lips are a deep shade of red. She is adorned with a pair of earrings and her hands are full of rings. Because Boccioni paints her in such a prominent location and with such exclamatory color, the viewer becomes curious. Immediately one starts to wonder who she is and what role she plays in the scene. Boccioni focuses her gaze slightly upward and not towards any other individual in the painting, thus creating a theatrical sense about the woman as if she were performing. The specific lighting that Boccioni paints resembles the lights of a show or a play on a stage, reinforcing this idea that the woman and other people in the painting are performing in some fashion.

Many other faces and bodies are collaged into the painting, but it is important to notice the two prominent men on the far left and the right sides of the painting. The man on the left is painted with his eyes shut and is wearing a frown. While the disposition of the woman above him is overwhelmingly grandiose, this man is reserved. Boccioni surrounds him with colors of dark blue, and places clutter of the room above his head and glasses near his hand.  In doing so, the artist excludes this person from the tone of the rest of the people. This individual is the only one painted with a frown and appears moderately uncomfortable, whereas the man on the right is leaned forward and appears to be interacting with the subject. His body language suggests that his mood is comparable the rest of the environment: positive, social, and interested. In comparison, the man on the left is leaned back and appears as though he wants to disengage from the event.

In an effort to get the audience to focus in on the details of the painting, Boccioni blurs the furniture and disrupts the borders of the subjects. For example, when he paints the tables that people are sitting at, he leaves out functional aspects of the table, such as legs. This causes the viewer to notice what is on and around the table, emphasizing the importance of those specific details. Focusing on the tops of the tables, one can see wine bottles, martini glasses and other vases or dishes that define the black shapes as a surface of a table. Human figures are painted behind and next to the tables conveying an image of a social evening of being out on the town or at a show.

As a whole, the artist uses a wide palette and assigns colors unconventionally. For instance, the skin tone of the woman on the left hand side is painted white, pink and even purple, while the man directly below her is painted in a common shade that one would expect a person’s skin tone to actually appear as. This use of color defines the woman as artificial. It causes one to focus on her and what she is involved in because of the unnatural aspect of her appearance. Contextually, one would assume that she is portrayed by Boccioni as contrary to the social norm along with the other women hidden in the painting whose skin and appearance resemble this woman’s. Because Boccioni paints all the women in this manner, it suggests that there is a specific, organized role these women are playing.  Also, the men resemble the natural forms of humanity through their realistic skin tone and body language, and are depicted by Boccioni as receptors of the artificial performance of the women. Although, the men are painted with similar palettes, their body language is not uniform, suggesting that their role depends variably on circumstance.

The depiction of women here evokes a form of control. Although there are a fewer number of women than men, these women are placed in locations throughout the painting that are above the men. The men in the painting show mobility and guard their surroundings. It is as though the women’s appearance has taken away from social normality, leaving the power in the hands of the women. Boccioni parallels Bergson’s “theory of laughter” through the female characters that he paints. He paints them in a rehearsed form of laughter attempting to relax and entertain the male subjects of the painting. Boccioni constructs a social dynamic in this painting that suggests a controversy of power and balance. He not only distorts the boundaries of normal depiction by abstracting the painting, but also questions cultural habits by juxtaposing men and women and their roles in society.