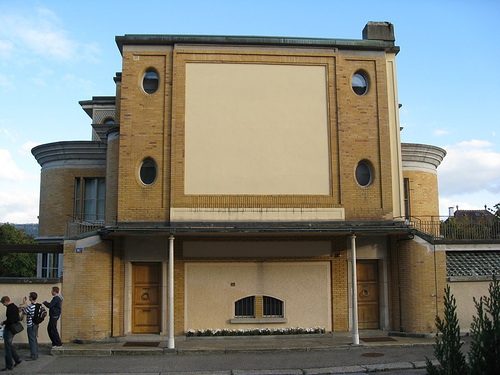 In 1916, Charles Edouard Jeanneret built the Villa Schwob in La Chaux-de-Fonds, Switzerland, for a watch-maker named Anatole Schwob.  Jeanneret constructed the building before he left for France and assumed the pseudonym, Le Corbusier, which is significant because he built it while still discovering his aesthetic as an architect.  The Villa Schwob appears larger and more complex than some of his later buildings, revealing that Le Corbusier was still experimenting with methods to best depict Purist ideals of clean lines and balance in architecture.  The Villa Schwob was important to Le Corbusier’s career because it gave him a chance to experiment with ideas, such as the Dom-Ino System, the free plan, and mathematical order, which he refined in his later buildings.

The Villa Schwob was one of the first villas in Europe where Le Corbusier utilized his Dom-Ino System.  This system consisted of large concrete slabs supported by a number of thin columns around the edges and a staircase leading to other levels, creating an open floor plan that makes the building appear more spacious.  Le Corbusier designed the Dom-Ino System in 1914 with the intention of building affordable houses consisting of mass produced and easily accessible materials.  The Villa Schwob, however, was never meant to be mass produced, which is evidenced by its large size and inclusion of “unnecessary” rooms, such as a game room and the servants’ quarters, which would be excessive for the general public.  Instead of using the Dom-Ino System to make the house more affordable, Le Corbusier used the system to experiment with space.

Le Corbusier designed the Villa Schwob so that it was supported by an individual structure of four interior columns, which created more open space and allowed the plan to focus around the central living room.  Within this living room, the most prominent and eye-catching feature is the large, vertical window that spans both stories of the house.  This window serves as a focal point, making the other rooms surrounding the living room become part of the periphery, thus more adaptable.  Even though the surrounding rooms are a “peripheral” part of the design, they are just as important to Le Corbusier’s overall aesthetic for the home due to their versatility and separateness: “There is a clear logical separation between the functional zones such as the public ground floor and private rooms above”.[1]  There is a game room and a dining room on either side of the living room, but they were designed so they would not detract from the centrality of the living room and the space it creates.  One feature that creates even more space is the rooftop garden, which became a staple of Le Corbusier’s houses.  These gardens allowed Le Corbusier to reach harmony in his architecture by creating a balance between industrial products and the natural world.

Another way Le Corbusier attempted to create harmony in the Villa Schwob was through the mathematical precision of the home’s design.  In 1918, Le Corbusier and Amédée Ozenfant published a Purist manifesto, in which they explained the importance of mathematical order:

The highest delectation of the human mind is the perception of order, and the        greatest human satisfaction is the feeling of collaboration or participation in this      order. The work of art is an artificial object which lets the spectator be placed in   the state desired by the creator. The sensation of order is of a mathematical   quality.[2]

This quote suggests that it is the artist’s, or in this case, the architect’s job to create a mathematically precise piece of art that will create a transcendent and harmonizing feeling of order.  Le Corbusier attempted to create order in the Villa Schwob through its geometric shapes.  Geoffrey H. Baker describes the Villa Schwob’s foundation as a cube within a half-cube, the cube consisting of the aforementioned columns within the home that help delineate one room from another.[3]  Baker claims that Le Corbusier designed the Villa Schwob with the “theme of curves against orthogonals” or “a basic contrast of cubic against cylindrical forms,” which is evidenced by the cubic shape of the base of the house and the semi-circular shape of the rooms on either side of the living room.[4]  The contrasting geometric shapes make the Villa Schwob appear more balanced, which Le Corbusier thought created order and transcendence.