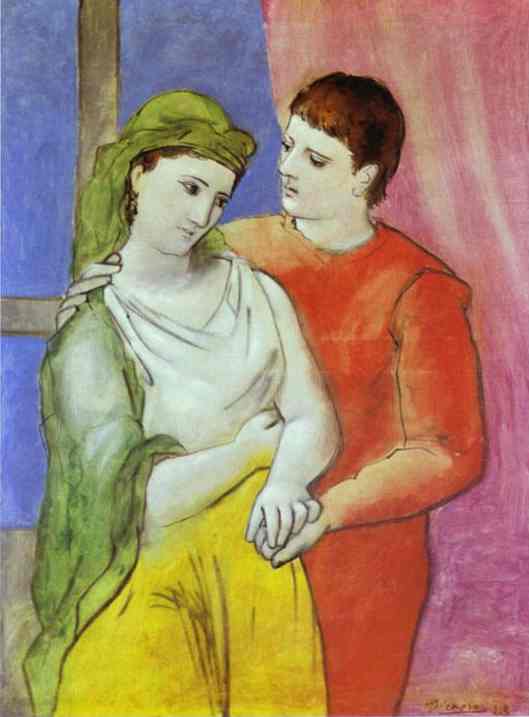 The Lovers is an oil painting of a young couple done by Pablo Picasso during his neoclassical period in 1923 in Paris, France. In the period after the upheaval of World War I, several artists in Europe started producing works in a neoclassical style. The press made Cubism sound destructive and inherently German in the period during and after World War I.[1] This led to a “return to order” which was a part of a reaction “against the excesses and violent originalities of prewar movements such as cubism, expressionism and primitivism.”[2] Picasso also visited Pompeii and the museums of classical art in Naples and Rome during his Italian trip in 1917 and what he saw affected his art.[3] This visit to Italy and then his marriage to the Russian ballerina Olga Kokhlova, who belonged to an elite social class, provided Picasso the “immediate stimulus” for painting classical subjects using classical techniques.[4] The Lovers portrays a relationship, a very classical theme, by showing a young couple embracing. Picasso uses several artistic techniques to demonstrate the harmony in the painting.

The Lovers is an oil painting done on linen. The use of linen instead of other materials such as canvas gives the painting a more smooth and refined appearance. The dimensions of this painting, which are 51¼ x 38¼ inches, show that it is quite large. The symmetry of the painting produces a balanced form showing regularity and harmony. Picasso uses soft and continuous lines in this painting, creating a graceful effect. There is also a slight emphasis on the outlines, showing that Picasso updated the classical techniques to make the painting his own. Despite the outlines, Picasso creates a fluid harmony in The Lovers by using smooth brush strokes.

Picasso uses bright colors in this painting including red, blue and yellow, all three of which are primary colors. The couple in the painting has the same brown hair color which is very realistic but their skin color is a grayish white which gives them a sculpturesque look. The colors  used are also desaturated, almost like in a traditional fresco painting, and they enhance the realism of the painting. Picasso creates an analogous harmony by placing the blue color next to the green, the green next to the yellow and the red next to the purple in this painting. The major contrast of the painting is between red and yellow in the clothing of the man and woman. This contrast is placed in the centre of the painting and these complementary colors add to its harmony.

Picasso has skillfully used perspective in this painting to give it an illusion of depth despite the sparse settings. He has done this in two ways: by placing the background window higher on the painting while the couple is lower, and painting the couple using bright colors while the background is dull in comparison. We can see the curtain and the window in the background which makes it seem like they are in a house. The man in the painting appears slightly smaller than the woman as he is hugging her from behind and is therefore behind her. This, again, gives the painting a three dimensional effect and hence a more realistic look.

The Lovers is dominated by the couple. Both the people seem to be large but stately and, unlike Picasso’s cubist paintings, their bodies are proportionate. The woman’s head is inclined towards the man and the man hugs her from behind while she reaches towards him. The man is also looking at her very attentively. This posture of the two lovers gives us a feeling of harmony and affection between them. Together, all the details of the painting create a sense of harmony making it one of Picasso’s best known works form his neoclassical period.